Rep. Denver Riggleman (R-VA) is facing a primary competitor and the GOP is turning a blind eye. Conservatives are targeting Riggleman for officiating a same-sex wedding in 2019.

After Riggleman officiated the wedding, three GOP county committees voted to censure him. Last November, the district committee voted to pick the next congressional nominee through a convention rather than a primary in a move targeting Riggleman.

Related: A Republican compared coronavirus measures to Nazis. His gay, Jewish governor wasn’t having it.

Now, his Republican challenger, Liberty University athletics director Robert Good, says “a number” of district supporters in “leadership positions” recruited him to run against Riggleman. Good announced on Wednesday that he has 62 percent of the district’s delegates, meaning that he’ll likely defeat Riggleman in a convention.

Convention elections tend to take away the name recognition and fundraising advantage that incumbents would typically have in a primary election. Instead of local voters, ballots are cast by a much smaller group of political diehards who register and show up for nominating conventions.

Good’s website says he has a “biblical view of marriage,” opposes a “transgender bathroom mandate,” and will defend “religious freedom” and “Judeo-Christian principles” if elected. He also says Riggleman doesn’t represent the “conservative values of this district.”

But while these views and Good’s association with the notoriously anti-LGBTQ Liberty University shows that the district may be ready to side with a queer-phobic conservative, that doesn’t mean that Riggleman is a supporter of LGBTQ civil rights exactly.

According to The Washington Post, during his time in office, Riggleman has opposed the federal Equality Act because it “infringed on parental rights” and voted against a resolution opposing President Trump’s ban on transgender military service members because it’s “something that we’re still studying.”

He also wants to defund Planned Parenthood, even though it provides numerous non-abortion medical services to women and transgender people in healthcare-deprived areas, and he opposes cannabis legalization too.

Riggleman officiated a June wedding for Anthony LeCounte and Alex Pisciarino, a “staunchly conservative” couple that met at a Log Cabin Republican event in Riggleman’s congressional district. The couple married at a vineyard in the foothills of the Blue Ridge Mountains.

“My real belief is that government shouldn’t be involved in marriage at all, but if it is, everybody has to be treated equally before the law,” Riggleman said in an interview. “And that is part of our Republican creed.”

“And it also comes down to love is love. I’m happy to join two people together who obviously love each other.” 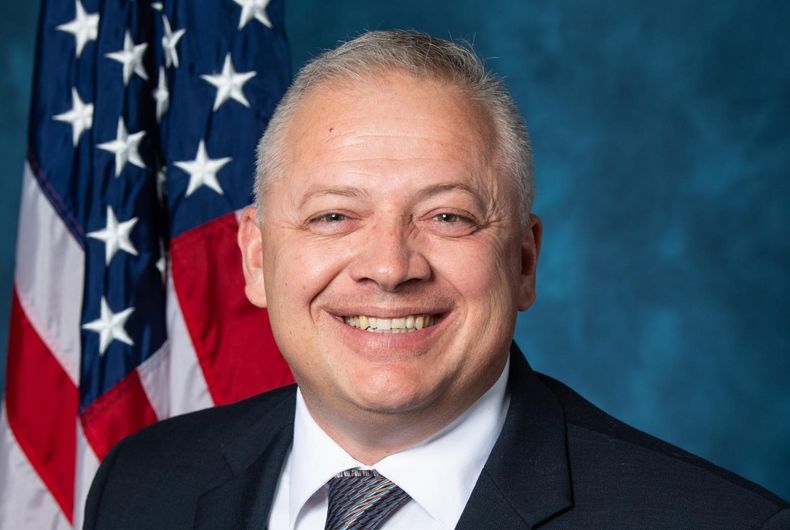 Rep. Denver RigglemanPhoto: U.S. Congress A Republican committee in Virginia has denounced a GOP member of Congress, in part because he presided over the wedding…