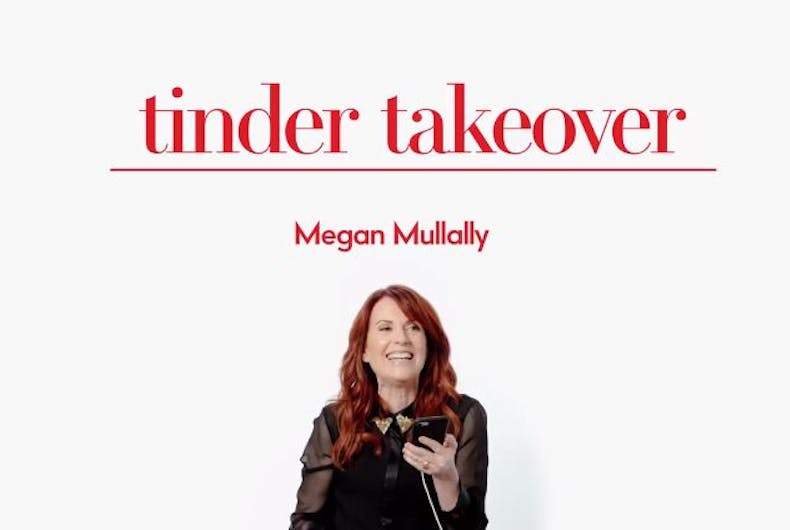 Megan Mullally thoroughly enjoys herself in the latest “Tinder Takeover,” pulling no punches on the unsuspecting men.Photo: Screenshot/Vanity Fair

Megan Mullally is the latest celebrity to star in Vanity Fair‘s hilarious “Tinder Takeover” series, and it just may be the best one yet.

“I have a lovely girl named Julia here, and I’ve stolen her phone and I’m going to go on her Tinder and ruin her life,” Mullally says to begin the savagery.

Some of the many highlights include telling a gym bro she needs protein, imagining a magical land called “Vagina-a-go-go,” which unsurprisingly the would-be suitor would like to learn more about, and telling a sweet young man to fuck off for not knowing how to scrapbook.

But that’s just the tip of the iceberg in a video that makes the other Tinder takeovers seem tame by comparison.

She even offends herself at points.

“This is horrible,” she says, laughing. “Maybe I better leave that one alone for a minute. I’m having too many feelings.”

Watch the insanity unfold in the video below, and, not like we have to remind you, but the Will & Grace revival is also a thing you can watch now, the season premiere having aired last night.