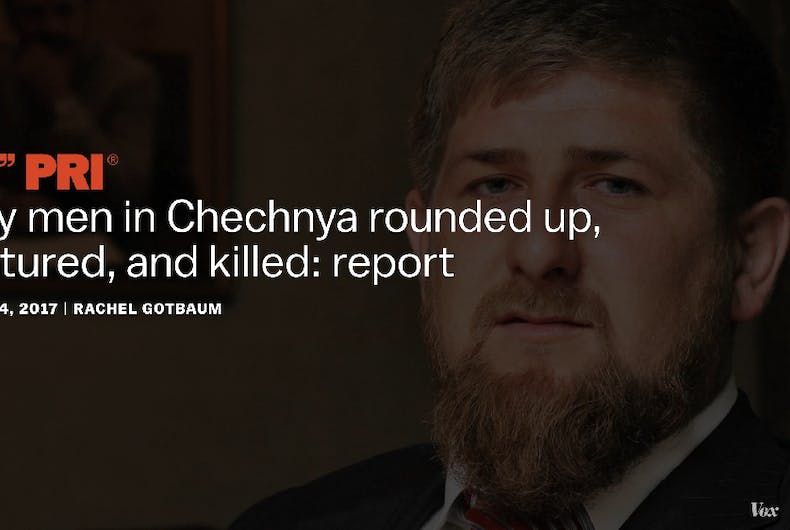 A video explaining the how Chechen president Ramzan Kadyrov rose to power might have come under attack by Russian spam bots.

This video was made by the website Vox to discuss Kadyrov and his country’s brutal oppression of gay and bisexual men.

It was posted on YouTube on Thursday, and by Friday the video had racked up thousands of “dislikes,” giving it a like-to-dislike ratio of 1:1 (the usual ratio, according to Shan Wang of Harvard University’s Neiman Foundation, is 10:1).

Comments on the video on YouTube, though, don’t show a corresponding amount of criticism. If that many people watched the video and hated it, then surely a lot of them would complain – writing mean comments is a veritable YouTube tradition.

watch the video that traffic from russia is bulk-spamming dislikes and trying to get taken down: https://t.co/go7HAVGMgC pic.twitter.com/9Qg91hQFgm

He also said that the video got over 230 privacy complaints on YouTube in four hours, even though in three years of producing videos Vox has never received a single one.

While dislikes actually increase a video’s visibility, they work to lower its credibility. And filing hundreds of privacy complaints about a video is a way to get it removed.

People encounter new information and new sources all the time on the internet. There are tools we use to determine how credible something is, but they can’t be monitored by real human beings because of the enormity of the worldwide web.

Which means these tools are open to exploitation. While information can never be completely hidden by disliking it on Facebook or whatever, it can be made less visible. Over a long period of time, some people’s ability to tell the difference between a credible site like Vox and a non-credible site created to deceive people on Facebook can be reduced to the point that they’re ready to believe ridiculous things.

For example, this past year it only took one person who believed that Hillary Clinton ran a pedophilia ring in the basement of a pizzeria to create a life-threatening situation. And we’ll probably never know if the cumulative impact of fake stories that allege that Clinton killed her political opponents caused enough people to sit the election out so that Donald Trump could win.

In that spirit, it’s worth going over to YouTube and liking that Vox video, if for no other reason than to vote for a fact-based internet.