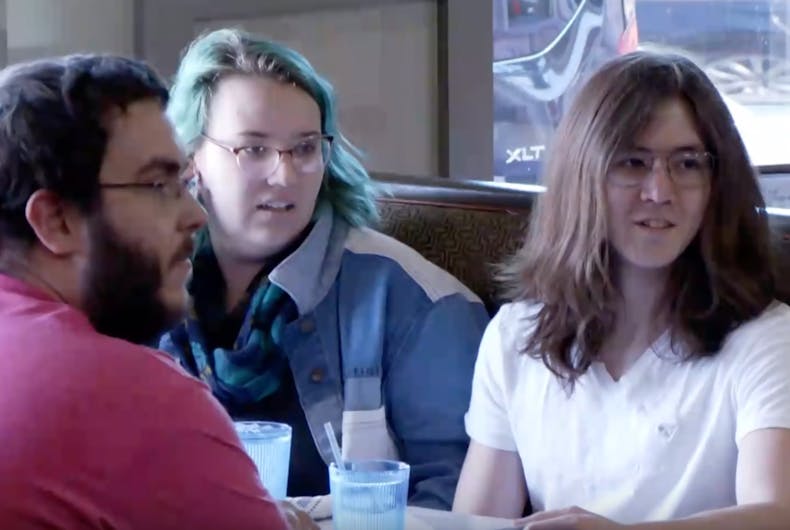 This group of friends came to the defense of the actress on “What Would You Do?”Photo: Screenshot

“You might feel like a woman, but you’re obviously a man,” said a woman dining with a child at a sit-down restaurant to a transgender woman getting ready to enter the restroom. “You can’t go in there.”

The confrontation continues, “I have a young lady here,” the woman said, while motioning towards the child. “It’s not right for you to be in there while she is. Men should use the men’s bathroom.”

Other patrons stare as the argument gets heated. Finally, another patron speaks up.

“Listen,” says the man seated at a table with three other people, “you can go to the women’s bathroom. Don’t even listen to them. She’s being ridiculous.”

Another of his tablemates also approached the trans woman and offered to go to the restroom with her, saying, “you can come with me.”

Related: Denny’s stood up for a trans woman who was arrested after she used the bathroom

When she returned, the woman who started the issue confronts her as to why she accompanied the transgender woman to the restroom. In reply, the good Samaritan said, “I’m a Christian, so, like, I have certain beliefs. You just got to love people the way you’re supposed to love people. And if she feels comfortable using the women’s bathroom, she’s not hurting anyone.”

Shortly after, the jig is up as young transgender activist and “I Am Jazz” star Jazz Jennings enters the room, accompanied by “What Would You Do?” host John Quiñones. Like similar scenarios the show explore, the scenario was a setup.

They ran through this scenario a few times with other groups, largely getting positive reactions towards the transgender woman in question.

The reactions moved Jazz, who told a group of men who similarly supported actress Nadia Hunter, who played the transwoman in the confrontation. Hunter is transgender as well.

“Just seeing you guys stick up for this woman over here was so incredible to me,” said Jennings. “It really just restored my faith in humanity. Because not everyone had the same reaction as you guys. Thank you for accepting and appreciating people for who they are.”

Watch the episode and further commentary from Hunter, Jennings, and others below: