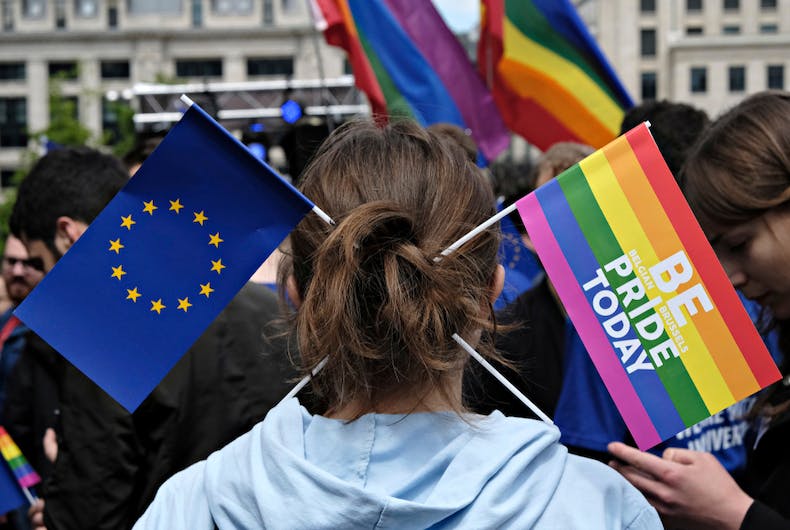 A young man sports rainbow and European Union flags in his hair during the Belgian Gay Pride parade in Brussels Belgium on May 20, 2017.Photo: Shutterstock

In the topsy-turvy world of Trumpism and foreign policy, international progress on LGBTQ rights hangs in the balance.

“That’s gonna be the end of the EU,” Donald Trump declared while on the campaign trail in Mississippi with Brexit advocate Nigel Farage.

Trump made his hostility toward the European Union clear by nicknaming himself “Mr. Brexit” during the presidential campaign, while his chief strategist offered help to Marine Le Pen’s far-right team in France and declared war on European unity.

Fast forward to today, and Trump is starting to make good on his promises to accelerate the disintegration of the European Union by imposing a steel and aluminum tariff to launch a trade war against European allies. EU nations have responded with counter-tariffs on $3.5 billion worth of US products.

Amid debate over the international impact of Trump’s trade war, another question remains. What do Trump’s attempts to weaken the EU mean for LGBTQ rights on a global scale?

According to IGLA-Europe, an organization which advocates for human rights for LGBTI people in Europe and Central Asia, the EU has been a driver of equality for LGBTQ people for the past 20 years. It set international standards by including protection for LGBTQ people in key legal documents and explicitly recognizing that “LGBT rights are human rights.”

EU legislation has triggered equality laws in other countries, like the United Kingdom, which implemented the EU Employment Equality Directive in 2003, extending protection from discrimination in employment to include sexual orientation.

The EU courts have provided even more protection. The European Court of Justice said in 1996 that protection against gender-based discrimination at work should also apply to people who had undergone or were planning to have gender confirmation surgery. The courts have also ruled that same-sex and transgender partners enjoy the same benefits as married couples.

This month, the EJC ruled that member states must recognize the rights of all married couples to free movement, regardless of their gender or sexual orientation. EU countries that have not legalized gay marriage must respect the residency rights of same-sex spouses who want to live together in their territory.

In 2016, all EU member states reached a consensus on LGBTQ rights for the first time in European history. The 28-member Council of the European Union backed an agreement to work against “any discrimination” against LGBTQ people, and increase European efforts on equality.

The EU’s solidarity with the LGBTQ people in Europe encouraged nations seeking closer ties with the union to extend protections to their LGBTQ citizens.

It’s clear that, at the very least, the EU’s support of LGBTQ equality in Europe has strengthened equality movements in member countries and those seeking to join the union, by setting a clear standard for equality across national borders.

The Trump administration’s attempts to weaken the EU place in peril recently-won protections in European countries by removing both the EU’s influence and incentive for member countries and would-be member countries to extend equal protections to their LGBT citizens. In its absence, those protections could be restricted or even repealed.

The EU raised the bar on LGBTQ equality in Europe. Its disintegration could obliterate the bar entirely.

Cancel reply
What do Trump’s attacks on the European Union & US allies mean for LGBTQ rights?