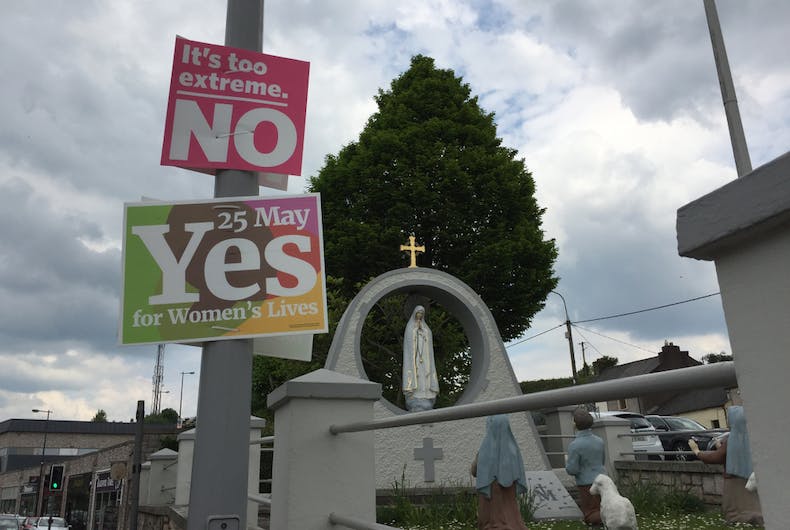 Cork, Ireland – Yes and No posters for the 25th of May referendum regarding the issue of abortion, near the Fatima and the three little shepherds statue in Blackpool.Photo: Shutterstock

Millenials played a crucial role in Ireland’s historic vote to repeal the country’s near-total ban on abortion. What can the outcome in Ireland tell us about America’s political future?

It was a once-in-a-generation vote for Ireland. So important that thousands of Irish expatriots flew home last month to cast their ballots in a referendum to repeal the abortion ban adopted as the Eighth Amendment to Ireland’s constitution. The thousands who flew home to vote — Ireland doesn’t have a system for voting via post — were likely among those who made #HomeToVoteYes a top-trending hashtag for weeks on Twitter.

With turnout as high as 70 percent in some areas, 69 percent of Irish citizens voted to repeal the constitutional ban on abortion. The abortion repeal is the second boldly progressive shift in the predominantly Catholic country within three years. In 2015, Ireland legalized same-sex marriage.

The results show that a globalized and less traditional generation is influencing the polls in Ireland. Indeed, exit polls showed that younger voters carried the day. Voters age 65 and over were the only age group with a majority vote against repealing the abortion ban.

Voters aged 18 to 24 made up the largest group with a majority — 87.6 percent ⏤ voting in favor of repeal, followed by 84.6 percent of voters age 25 to 34 voting for repeal. It looks like “Generation Z” and millennials led the way in ending Ireland’s abortion ban.

Does the historic vote in Ireland tell us anything about the future of American politics?

Millenials are currently America’s largest generation, making up 25 percent of the total US population. They’re also one of the most diverse; 44 percent of them are minorities. As in Ireland, there’s a distinct “generation” gap between millennials and baby boomers on social issues like marijuana legalization and same-sex marriage.

Millennials are also decidedly liberal. According to Pew Research Center, just 27 percent of millennials approve of Donald Trump’s performance as president, compared to 64 percent approval for Barack Obama. They’re most likely to support the Democratic party or lean Democratic. They’re one of the only generations in which a majority — 57 percent — hold consistently liberal or mostly liberal views.

Generation Z, considered to be young people born in the mid-1990s, isn’t far behind millennials and may soon overtake them. By 2020, they will count as one-third of the US population and are the most diverse in history. We’re only just beginning to see what this generation can do, in the wake of the March For Our Lives demonstrations in response to the Parkland school shooting.

Meanwhile, the baby boomers — the generation that keeps Fox News afloat and was critical to Trump’s rise — is waning. Generation X remains the “neglected middle child,” sandwiched between two much larger generation.

All of this suggests that we’re living in the last gasp of the more conservative generations and their hold on power. If the Trump administration is any indication, those generations are bent on wrecking things as much as possible on their way out the door.

The demographic trends bode well for progress on social issues. Millennials and Generation Z will have the numbers to effect change on a wide range of issues. Whether they will sustain the political will to do so after dealing with the damage done by previous generations remains to be seen.

Cancel reply
What does Ireland’s abortion vote say about the future of politics in the US?