Asexual. You’ve probably heard the word before, but what does asexual mean? Is there a clear-cut meaning or definition?

If you’ve got questions, you’re not alone. In fact, a 2019 survey found that 73% of people couldn’t accurately define asexual. But we’ve got some answers that’ll help.

What does it mean to be asexual? Here’s a clear-cut definition

Asexuality is different from celibacy in that celibacy is seen as something you choose whereas asexuality is seen as something you are, more of an intrinsic identity. As such, the “A” in the ever-growing LGBTQIA acronym actually stands for “asexual” (and not “ally” as some people wrongly assume). The asexual community even has its own asexual Pride flag.

It’s estimated that 1% of the world population is asexual (or “ace” as it’s also called). That may not sound like a lot, but that’s roughly 77,000,000 people, just over the entire population of Canada and Poland combined. So it’s entirely likely that you’ve met asexual people and just not realized it.

The asexual spectrum & types of asexuality

But let us simplify things for you. As GLAAD explains, the asexual spectrum is perhaps best described using the Split Attraction Model (SAM), a two-sided description which “splits sexual and romantic attraction into two separate things” — when joined together, these terms help explain who you’re attracted to and how you’re attracted to them.

The 150 different types of asexuality on the asexual spectrum provide ways for people to specifically explain how attracted (or not) they are to sex and romance and why. Having these words can help people better understand their own experiences, help them understand that they’re not “weird” or “broken” and help them find a community so they feel less alone.

Let’s take a look at some of the more common types on the asexual spectrum and how they work.

Beyond these basics, the types of asexuality on the asexual spectrum start getting more numerous and nuanced from there. The terms describing specific types of sexual and romantic attachments often explain how you’re attracted to people more so than who you’re attracted to.

It may seem odd that a community that defines itself by not having sexual or romantic feelings should have so many words for both. But remember: These asexual types fall along a spectrum and many asexual people still have sexual romantic feelings or find themselves in such relationships for lots of reasons: affirmation, physical comfort, emotional connection, and societal pressure are just a few.

As such, these terms help everyone understand the nuance different types of attraction, whether we’re asexual or not.

Am I asexual? Can an asexual quiz or asexual test tell me if I or someone else is?

But, asking yourself a few questions can help you explore your feelings around sex and relationships. Here are a few that you might find helpful:

Like other LGBTQ identities, only you can decide whether to self-identify as asexual or not. Everyone’s approach to sexual and emotional relationships are different, and there’s no need to apply a label if it doesn’t feel right, no matter what an asexual quiz or an asexual test might tell you.

Now that we’ve defined asexual, it’s time to go beyond the basic asexual meaning into asexual people’s lived experiences. While some asexual people decide to stay single, some try asexual dating and others get into relationships (even polyamorous ones). Some enjoy feeling sexual sensations (either alone or with partners) and others have family and children.

Asexuals have existed throughout history, but before the internet, many felt lonely or broken because they couldn’t connect with others like themselves. These days, online communities like the Asexual Visibility and Education Network (AVEN) and educational events like Asexual Awareness Week (commemorated during the last full week in October) have helped unite asexual people and lift up their experiences.

Generally speaking, asexuals just want the right to exist and to be understood without stigma, discrimination, shame or social pressure to conform, just like the rest of the LGBTQ community. Asexuality isn’t a mental disorder, it isn’t the result of trauma or an inability to get laid, and it doesn’t need to be cured. Asexuals aren’t afraid of intimacy, they’re not sex-negative slut-shamers and they do have feelings and dreams just like the rest of us.

While asexuality has never been illegal, it has been hidden away and stigmatized. There are few out asexual celebrities, most media excludes asexual characters and storylines, and American laws tend to favor married couples over single people. (There are over 1,049 federal benefits and many other privileges related to marriage that single, unmarried and asexual people can never access.) In extreme cases, asexual people have even been forced into marriages or subject to violence and so-called “corrective rape” to “cure” their asexuality.

Some disagree that asexuality should be considered part of the LGBTQ community because they haven’t faced the same historical discrimination for their gender identity or who they love. But others say that asexuals also define themselves by their sexual attractions, are steadfast allies to the LGBTQ community and that the “queer umbrella” shouldn’t just be defined by a group’s societal hardships.

Who are some famous asexual celebrities?

There are also a few well-known asexuals celebrities in pop-culture. Jughead of the Archie comics came out as asexual in 2016. Many fans of Sir Arthur Conan Doyle’s Sherlock Holmes mysteries assume the fictional detective was asexual because he never exhibited sexual attraction towards others. Steven Moffat, the creator of the 2010 Sherlock TV adaptation, declared his version of the legendary detective to be asexual in one interview but he reneged in a later interview.

Sadly, there aren’t too many asexuals celebrities on TV. Among a shortlist of asexual TV characters are Todd Chavez, a supportive best friend in the animated Netflix series BoJack Horseman; Lord Varys, the royal advisor and eunuch from the fantasy drama series Game of Thrones; Raphael Santiago, the vampire leader in the supernatural Freeform series Shadowhunters; Evan Waxman, the “asexual magician” in HBO’s episodic marijuana-series High Maintenance; and The Professor from Gilligan’s Island who once admitted to never feeling romantic interest in anyone.

While some fans label any character lacking an explicit sexual orientation as asexual, some creative works have failed to properly answer the question, “What does it mean to be asexual?” by using asexuality as a punchline or equating asexuality with robotic coldness or even psychopathic narcissism.

The 2014 USA sitcom Sirens repeatedly made a punchline of its asexual character, Valentina “Voodoo” Dunacci, and Craig Kilborn in CBS’s The Late Late Show once ran a bit entitled “Sebastian: The Asexual Icon” as a way to depict asexuals as prudish and sterile.

Others have tried to comment on Hannibal Lector, the cannibalistic serial murderer from the Silence of the Lambs book series, or Data, the android from Star Trek: The Next Generation, because neither ever expressed sexual desire.

Naturally, many ace community members aren’t comfortable with such dehumanizing and stigmatizing comparisons. They prefer the community be allowed to self-identify rather than having the label attached to anyone who doesn’t seem to have sexual desire. 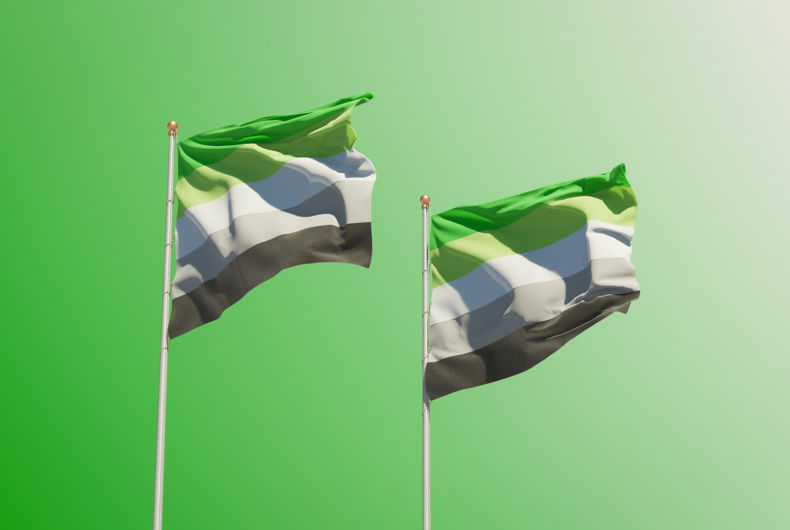 Cancel reply
What is asexual? Here’s the asexual spectrum, an asexual quiz & everything else you’re curious about