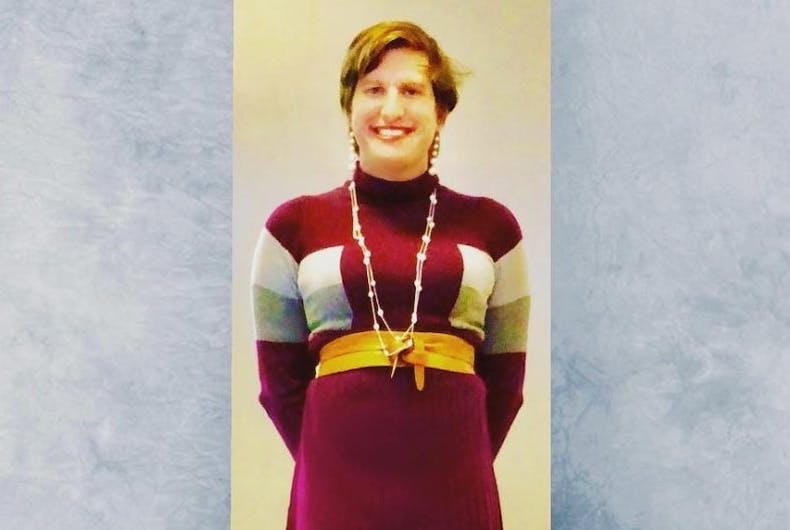 Charlotte Clymer had a bad experience on Lyft in DC May 2.

But the transgender woman, a six-year Army veteran who is now press secretary at the Human Rights Campaign, did what she does so well. She made it another teachable moment on Twitter:

Sit back, and let her tweets tell the story.

“I had a weird incident happen to me this morning, and I almost hesitate to talk about it, but I think it’s important and needs to be known.

“I think it’s important to talk about what happened to me this morning because 1) folks need to know things like this do happen and 2) I want to recognize two wonderful human beings for being, well, wonderful.

“Coming back from an early morning doctor’s appt, the Metro got pretty bad delays on the Red Line. I decided to get a Lyft, which is expensive, so I wound up taking the Line option, which is basically carpooling with other passengers and a lot cheaper.

“When the driver arrived, I got in, and they asked me “What is your name?” And immediately, I was caught off guard because the tone of the driver’s voice was hostile. They sounded angry. I thought maybe I was misunderstanding the situation, so I asked them to repeat themselves.

“’What is your name?!’ Same question. Same hostility. ‘Uh, Charlotte.’ And they respond with an exaggerated ‘Huh,’ not as a question but in an observatory way. Anger still there. My mind is whirring, and I tell myself to calm down. I’m overthinking this. Let it go.

“Another passenger gets added to our ride, and a few minutes later, we pick them up. They get in, and there was an exchange of hellos. No hostility. No sense of anger or questioning. My mind goes back into whirring mode, and I feel small, and I decided that’s unacceptable.

“I decided I could not be in this person’s car for another second, and luckily, we were at a stop. ‘I need to get out.’ Driver: ‘Fine.’ And without hesitation, the other two passengers, far from their destinations, strangers to me and each other, say they’re getting out, too.

“These strangers got out with me and immediately say they’re sorry for what just happened. And I feel apologetic, but they’re having none of it. They assured me I did nothing wrong and both decide to take a cab with me downtown.

“My hands, I realize, are shaking. I’m on the verge of tears, and the only thing that keeps me from crying are these two lovely people, these strangers, who engaged me in conversation to take my mind off what just happened. And so we talk.

“I learn one is Robert Byrne, who does comms at @VictoryFund. The other is @jessordonez10, a comms intern at @NWF. I felt hurt and shame. I irrationally + quietly kicked myself for not dressing femme enough, as if that would have helped. Their warm conversation was like a balm.

“I don’t know their gender identities. I just know these are two human beings who were not bystanders to what unfolded. Both did not hesitate to step in with support. They did not have to be asked. They simply stepped up. And I sure as hell did not let them pay for our cab.

“I feel a lot of emotions with what happened. I’ve been feeling them all morning. But the one thing I haven’t felt is alone. They made sure of that.

“Today, I’m making donations to @VictoryFund, which works to elect LGBTQ candidates, and @NWF, dedicated to preserving wildlife. I encourage all to donate to these two orgs, and of course: follow @victoryfund (Robert doesn’t have a personal account) and @jessordonez10.

“One last thing: I am proud to be transgender, I am proud of the transgender community, and I will assert that trans is beautiful. To those filled with anti-LGBTQ hatred, I want you to know there’s beauty in you, too. Put down that burden of hate, and walk with us.

Later that day, Clymer updated us after Lyft reached out to her. The company was “incredibly professional and kind,” she tweeted. It permanently deactivated the driver.

It’s not the first time Clymer has taught us on Twitter. A few weeks ago, when street preachers sought to pray for her, she taught them as well.

@cmclymer Thank you for your kind words, but there’s no need to thank me. What I did is just what any decent human being should do. We all deserve respect. It’s a shame that we had to meet this way, but it was a pleasure talking to you. https://t.co/ty8LSXyqul

Cancel reply
When a Lyft driver turned hateful, two beautiful strangers made it better for this trans woman