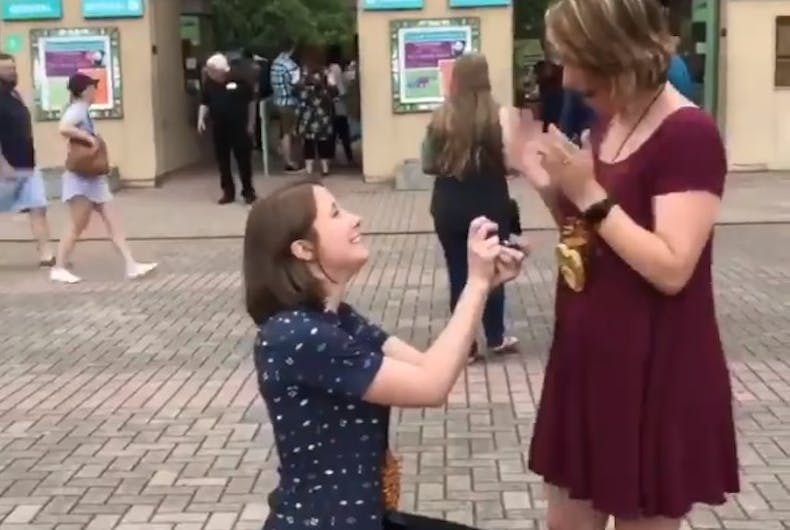 A trip to the zoo turned into a double surprise proposal for a lesbian couple.

Becky McCabe and Jessa Gillaspie went to the Memphis Zoo last Friday for an annual beer festival, the Zoo Brew. The zoo was where they went on their first date.

After taking some pictures at the entrance, Jessa pulled out a ring and proposed to Becky.

Becky’s reaction was priceless. The answer wasn’t just “yes”; she had also brought a ring and was going to propose to Jessa.

?????? Becky McCabe and I got ENGAGED Friday night at Zoo Brew!!!!!!! I had no idea she planned to propose, and she had no idea I planned to propose to her! We were both so surprised!!!! We were surrounded by our friends and had the most amazing night. I am the luckiest girl in the world to be able to call her my fiancé. ?????? #TheMcBabes #MichelliaDesigns***UPDATE: We had no idea this would blow up so quickly! But I can’t say I’m not thrilled, because all I’ve ever wanted was for Beck and the world to know how much l love her. We are overwhelmed with all of the positive responses. Really, you guys have no idea how much that means to us!***Many people have asked us to film the wedding so they can see it. So we’re trying to raise money for a videographer since we will be paying for the wedding ourselves. Here is the link if you wish to help: https://www.gofundme.com/share-the-mcbabes039-wedding

“We are overwhelmed with all of the positive responses,” Jessa wrote. “Really, you guys have no idea how much that means to us!”

Cancel reply
When she asked her girlfriend to marry her, she wasn’t expecting this response