The van attack in Toronto propelled the “incel” movement into the headlines, but who are they – and why aren’t we hearing about gay “incels”?

“Incel” stands for “involuntary celibate.” The term originated in the darkest corners of the alt-right “manosphere.”

As Dan Savage points out, the “incel” movement seems to consist almost exclusively of heterosexual men driven to rage by their inability to find women willing to date or have sex with them. In his exhaustive take on the subject, there’s one question Savage doesn’t answer: Where are the gay “incels”?

No one group has cornered the market on sexual deprivation. As an advice columnist, Savage hears from all sorts of sexually deprived people — male and female — who suffer from frustration, loneliness, and depression. But the overwhelming majority of them don’t become mass murderers, turning guns on innocent people or mowing down pedestrians with their vehicles.

“Incels” seem to have two major traits in common.

The first is a sense of entitlement to women’s time and attention, and to their bodies. The second is misogyny, an intense hatred of women; in the case of “incels,” this hatred is fueled by a sense that women have wronged them, by denying them the sexual or romantic success to which they feel entitled.

Surely there are sexually deprived and frustrated gay men out there. So, again,where are all the gay “incels”?

It’s certainly not because gay men are necessarily less misogynistic. Our community has its share of sexists, just as it does racists and even homophobes.

Gay men, however, don’t desire sex with women, and thus don’t have a sense of entitlement to women’s bodies. And society doesn’t socialize men to believe they have a right to other men’s bodies.

Perhaps, also, gay male sexual culture has evolved in such a way that sex is easier to find. There’s less stigma about anonymous sex and sex work among gay men. There are still cruising spots and bathhouses where anonymous sex is easy to find. The internet spawned an online hookup culture, with all manner of chatrooms and sites where men seeking sex with other men can find each other.

Nothing justifies taking the lives of others just because you can’t get laid, no matter who you are – gay, straight, or anywhere on the spectrum. But until straight men learn that lesson they’ve avoided since the beginning of time, at least gay men can’t be blamed for this (non)sexual behavior. 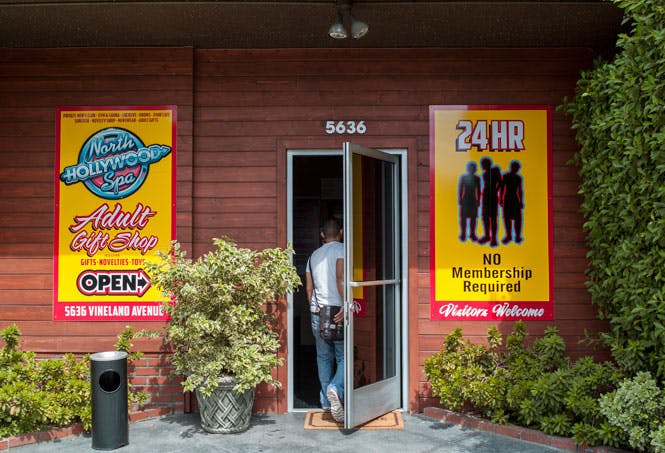 A patron enters the North Hollywood Spa in Los Angeles. Gay bathhouses that once were shut down by laws or public outcry are facing a…

Cancel reply
Where are the gay ‘incels’?