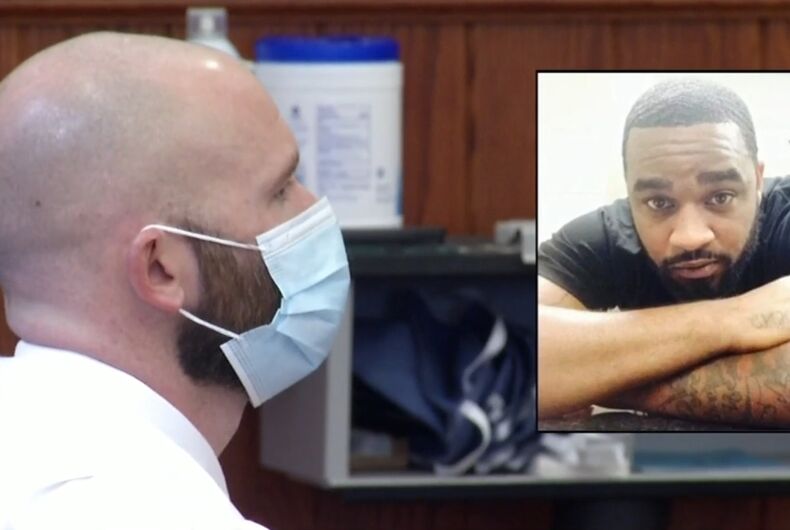 Investigators believe a white man whose father is a former cop shot his Black lover to death, but he was sentenced to one year of jail time in connection to the shooting and didn’t even face any charges stemming from the killing.

“In order for the defendant to hide his feminine, bisexual nature, he executed my son and my grandson’s father,” said Dominic Broadus Sr., the father of the victim, in court earlier this week, “he fatally shot my son in the back of the head twice and tried to destroy any evidence of their relationship by deleting all text from his phone and destroying/hiding my son’s phone, then calling three people before reporting the shooting to the proper authorities.”

Related: Man who murdered gay couple flipped off the victims’ families as he was sentenced to death

The case involves the death of Dominic Broadus Jr. on February 3, 2018, nearly three years ago. Investigators believe that Broadus Jr. went to the home of Gardner Kent Fraser and was shot there.

Fraser, in fact, admits he shot Broadus outside of his home in rural Florida. He just claims that he shot him in self-defense.

He called 911 after he shot Broadus and told the 911 responder “Ahh, I believe I do” when asked if he knew the victim. But it turns out that they had a more intimate relationship.

Since he is the son of a Baker County deputy, the investigation was later turned over to the Florida Department of Law Enforcement (FDLE), which believed Broadus was holding a cell phone at the time he was shot.

The FDLE believes that Fraser first called a cousin after he shot Broadus, and the cousin told Fraser to call his dad, who is a former deputy for the Baker County Sheriff’s Office. The father told him to call 911.

The phone was never recovered, and investigators believe that Fraser got rid of it.

“This defendant took the actions to get rid of that phone,” said Assistant State Attorney Mark Caliel in court. “Where it is, we don’t know your honor. To this day only one person knows where DJ Broadus’s phone is, that’s Garner Fraser.”

And Fraser deleted text messages from his own phone, possibly to hide the nature of his relationship with Brodus Jr. But the FDLE still recovered 115 phone calls and 35 text messages between the men from Fraser’s phone, and a lot of them were sexual in nature.

So Fraser was only charged with tampering with evidence because the State Attorney’s Office said in a statement, prosecutors are “ethically prohibited from instituting criminal charges that we cannot prove beyond a reasonable doubt in a court of law.”

But Broadus’s family believes that this is an instance where white supremacy and family connections undermined justice. Fraser’s family has deep ties to the Ku Klux Klan,

“It’s brought light on to what everyone already knows: the prejudice is here. The racism, that’s here. The favoritism, that’s here,” Anita McGoogin, who co-organized protests for the victim, told News4Jax. “And just this case alone, tampering with evidence when he was blatantly executed on their property.”

And at his sentencing hearing this week for the tampering with evidence charge, Fraser’s lawyer even argued that it’s actually Fraser who has been traumatized by the shooting. The defendant entered a plea of no contest to the charge.

Judge James Colaw sentenced Fraser to one year in jail, the maximum sentenced allowed under the law for tampering with evidence.

But the victim’s family isn’t satisfied.

“Not happy with everything they’ve done,” Broadus Sr. said in a statement. “Not happy with the laws of the state of Florida. Like I said, the evidence is there… clearly shows this was murder, and probably even call it premeditated.”

“The intent was to silence him, first physically and then, by any means necessary,” said Del Swain, the victim’s mother. “And destroy the evidence that would let the world know exactly what it transpired. The attempt to cover the secret that DJ and his cell phone held did not work.”