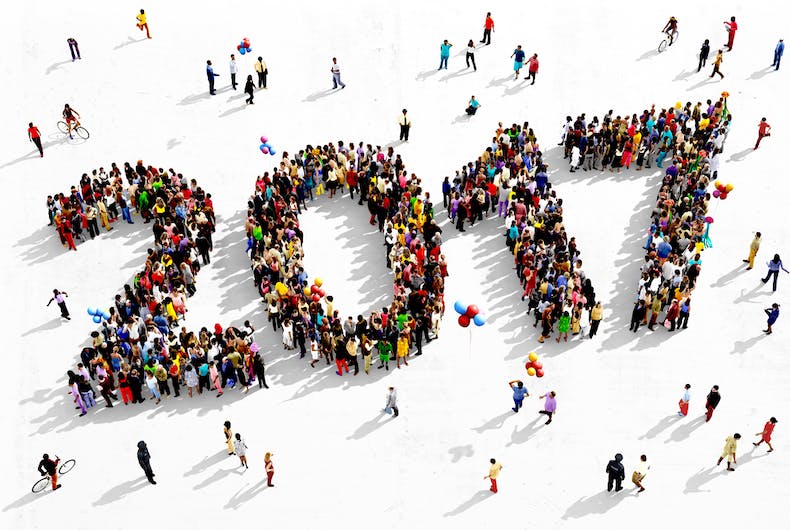 Who will be LGBTQ Nation’s 2017 Newsmaker of the Year?Photo: Shutterstock

As 2017 comes to a close, it’s time for LGBTQ Nation’s look back at the queer brothers and sisters that have helped shape the culture this year, and advanced the struggle for equality–or at least battled the forces of evil to a standstill.

This year, in what felt like a godawful reality show, Donald Trump and his alt-right nincompoops took aim at transgender people, stocked the cabinet with Billionaire anti-LGBTQ activists, and tried to undermine marriage equality. Thankfully, these inspirational heroes have helped lead the fight, bringing attention to the issues queer people must confront every day.

Sadly, disgraced former alt-right darling Milo Yiannopoulos won the most votes last year as pessimism and dismay swept progressive politics. This year, we focus on newsmakers making a positive impact on our community and setting us up for future gains.

Who will take the title of Newsmaker of the Year this time around? Have a look at our list of trailblazers and vote in our poll at the bottom of this post.

Speaking of recent outings, horror film star The Babadook shocked the internet by coming out of the closet as a gay… whatever he is… this past June. Ok, so in actuality Netflix accidentally filed The Babadook under gay interest films, rather than horror. That said, the popularity of the film swelled as gay fans began to see the movie as a metaphor for sexual repression and denial. By the end of the year, The Babadook had secured full-on gay icon status, and rumor had it that he’d hooked up with another horror star, the demon clown Pennywise of IT. In a horrible insane year, with the president of the us threatening to kill 35 million North Koreans, what better anti-hero than a horror movie icon?

While she has played the is-she-or-isn’t-she game for years as her political star rose, Donna Brazile doesn’t truly need to come out – she already is. Or, at least, was when she served on the board of the 2000 LGBT Millennium March on Washington. This year, Brazile made headlines again after her book detailing her time as the head of the DNC spilled the beans on the heated battle for the Democratic primary between Hillary Clinton and Bernie Sanders.

The married gay couple went to Masterpiece Cakeshop in Denver to buy a cake for their wedding reception, when the owner refused to serve them because they are gay – without even finding out what they wanted. The two complained to the Colorado Civil Rights Commission and while the agency ruled in their favor, the baker, Jack Phillips, has appealed multiple times. Despite losing each time, the case has made it in front of the Supreme Court where it could have a reverberating impact on all civil rights laws when it releases a decision next year.

In January, bi writer Roxane Gay pulled out of her book deal with Simon & Schuster after the publisher gave far-right troll (and LGBTQ Nation‘s Newsmaker of the Year in 2016) Milo Yiannopoulos a $250,000 book deal, landing her in the center of a heated debate about tolerance for hate speech. Her act of protest was one of the first in the left’s backlash against the right’s growing fascism and the mainstream media’s deference to it. Gay’s book, Hunger: A Memoir of (My) Body, was published in June by HarperCollins with positive reviews; the LA Times called it “a bracingly vivid account of how intellect, emotion and physicality speak to each other.”

The pop star and activist raised eyebrows and made headlines earlier this year when she turned up at Disneyland holding hands with girlfriend Lauren Abedini. Lovato famously plays coy when discussing her own sexuality, preferring to go without a formal label. She has, however, admitted that lyrics involving lesbian encounters in her lyrics are autobiographical, performed in gay clubs, and defended the LGBT community, including her late grandfather. Needless to say, her lesbian fans went nuts after her semi-outing outing. The rest of us were just happy to have her on the team.

Anthony Romero, the head of the ACLU, was the first Latino and gay man picked to helm the venerable civil rights organization. In this first year of the Trump dumpster fire, Romero has stood front and center as a leader of the resistance. The ACLU has championed practically every LGBT civil rights case this year, including the notorious cake shop case, as well as challenging Trump’s attempted ban on transgender people in the military. Romero has also overseen cases challenging the so-called Muslim ban, and anti-immigrant policies as well. Here’s hoping Mr. Romero continues to use his gifts for legal wranglings in the years to come.

The first African-American woman to lead a major LGBTQ organization, former Victory Fund President Aisha Moodie-Mills definitely left her mark on the political landscape. The org famously promotes and mentors aspiring LGBTQ political candidates and, as transgender and gay candidates won office across the nation, Moodie-Mills left at a high mark of her career earlier this month. The photogenic and charismatic leader hasn’t announced her next step yet, but you can be guaranteed you’ll be hearing more about her in 2018.

The out gay actor helped springboard the #metoo movement from women documenting the times they’ve been sexually harassed or abused by men into a look at how powerful gay and bisexual men also assault other men. Rapp’s account of being sexually abused by actor Kevin Spacey as a teenager quickly made nationwide news and led to multiple other allegations of sexual misbehavior against the actor. Rapp’s brave statement helped expose a darker side of the LGBTQ community that has been hidden from view for too long.

Roem made history as the first transgender person to win office as a state legislator. The Virginia Democrat handily defeated her far right opponent, Bob Marshall, who had dubbed himself the state’s “chief homophobe.” While Marshall, who sponsored the state’s proposed “bathroom bill,” made it a point to denigrate Roem on the campaign trail because she’s trans, Roem didn’t flinch from embracing her gender identity as part of her whole self while staying focused on what actually mattered to voters – local transportation issues. After Marshall refused to call Roem to concede and continued his trans-bashing, Roem’s classy clapback made national news.

Ever since the 2016 “bathroom bills,” transgender folk have had a spotlight role in the struggle for equality. This year, they refused to back down after Trump declared his intention to have them banned from military service. Military commanders agreed, and five unidentified transgender service members filed lawsuits to have the ban declared unconstitutional. Their suit may not have derailed Trump’s anti-LGBT agenda, but it has slowed it down. It’s also proven that transgender people love and serve their country too.

Cancel reply
Who will be LGBTQ Nation’s 2017 Newsmaker of the Year?