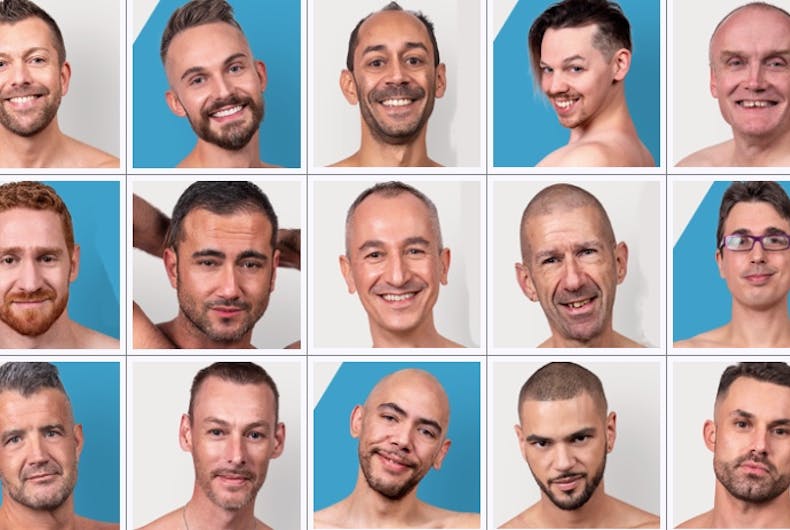 The campaign seeks to address the 102,000 people in the UK living with HIV. But out of 20 models, possibly two men identify as South Asian to some degree and none of these models are Black or any other racial minority.

According to one of the campaign models, Ant Babajee, the models of the Stripped Bare Campaign were recruited on a volunteer basis pending on “who showed up.”

Related: Support this documentary about a gay ‘saint’ who helped poor, HIV-positive people die with dignity

Babajee said the GMFA had exclusively focused on Black men for another campaign — the Me, Him, Us campaign — led by Phil Samba, who recruited Black models for the project. While the GMFA didn’t explain why the organization created a separate campaign exclusively for Black men, they sent statistics that showing how Black men are disproportionality affected by HIV.

When asked how they reached out to communities of color when looking for models, neither Babajee nor Phil Samba (a person who helped organize models for the Me, Him, Us campaign) initially commented when we reached out.

However, Samba did email LGBTQ Nation to explain why some models of color might not have wanted to participate, citing “an onslaught of trolls, homophobia and racism for doing [previous campaigns],” fear of being outed and social stigma within their communities.

“How many of us are willing to go ‘public’ about our sexuality let alone our sex lives?” Samba wrote. “Many of us are still safer in ‘the shadows.’”

Samba also wrote that some the GMFA’s previous campaigns (and other UK HIV campaigns) like Can’t Pass It On, It Starts With Me, The Undetectables, and PrEP Works, all feature men of color.

Just like the US, the United Kingdom has racial inequalities intertwined with HIV/AIDS. According to a UK-based HIV education site avert.org, one in seven black men are likely to contract HIV, especially Black men of African descent.

Mentioning their Me, Him, Us campaign and their valuing of diversity, GMFA media contact Ian Howely said, “We approached black, Asian, and South Asian men who are living with HIV or on PrEP, but were told that because of family reasons, cultural issues, and the fact we’re asking them to get naked on camera they couldn’t do it.”

In response, I sent him a picture of myself, a man of Pakistani heritage, posing naked on camera for a gay community effort.

In October 2018, BBC News highlighted a British government roll out of a Bollywood-themed HIV-prevention campaign aimed at South Asian communities. The government argued that while “HIV [in the UK] is on the decline, but this decline is slower in South Asian populations.” According to sexual health expert Dr. Rusi Jaspal, South Asians face ostracism from their ethnic communities, decreasing their access to sexual health services and HIV knowledge.

South Asians and other Asian communities are also underrepresented in US anti-HIV campaigns (and in queer life in general). These campaigns often overlook Asian-American communities, who account for the smallest incidence of HIV but remain starkly under-tested because of language and cultural barriers, ethnic nuances, slut shaming, and anti-Asian racism in the LGBTQ communities. Fundamentally, all of this impact their relative ability to be “seen” as fully American.

The GMFA and other HIV non-profits should readjust their social marketing campaigns to be inclusive of South Asian and Black men. Understandably, increasing attention to those most affected by HIV is a very important step in both the US and the UK, but continuously leaving Asians out of the HIV/AIDS conversation further removes the Asian community from culture and politics.

Asian communities need to start getting the representation they deserve because HIV affects everyone, and nobody’s sexual health should be trivialized, ignored, and under-represented.

Correction: A previous version of this story erroneously listed Samba as an organizer behind HIV Stripped Bare 2018, and GMFA as GMHP.