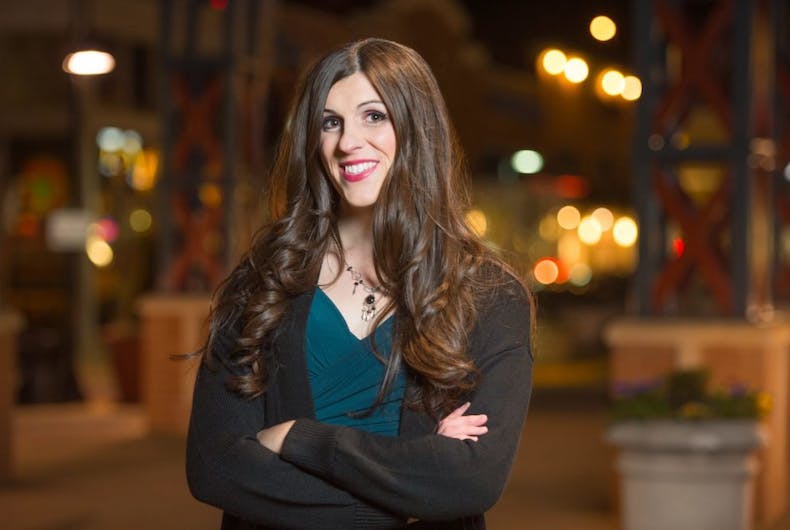 The school board in Danica Roem’s Viriginia district has approved a nondiscrimination policy.Photo: Facebook

Delegate-elect Danica Roem, who made history as the first transgender person elected to statewide office, soundly trounced her opponent, Virginia’s self-professed “chief homophobe,” Bob Marshall. While the victory was especially sweet given Marshall’s horrific stance on LGBTQ rights, Roem was gracious in both her campaign and her reaction to winning the race.

Even Marshall’s sister couldn’t resist jabbing her transphobic brother after his loss. Roem, however, cut him with kindness during an appearance on MSNBC shortly after her win.

Mean spirited Marshall refused to debate Roem and deliberately used the wrong pronouns when talking about her. He wouldn’t even call her to concede and congratulate his opponent. Instead, he wrote a transphobic letter to the Washington Post.

And they published it, saying the transphobic attack that describes Roem as being part of a group of “people who think they are the opposite sex,” is “important.” They even provided a helpful link to a fake news story to help him make his case.

The letter says Roem will make it a priority to “force insurance companies to cover sex change operations” and veers into the rightwing boogie man of “sex-change regret.” The post links the words “sex-change regret” to a sensationalized Newsweek rewrite of a London Telegraph piece that was widely circulated among conservative websites and news outlets earlier this year in an attempt to downplay the needs of transgender people.

So why would the Post publish a letter like this? If a letter came in that had a similar slur about African-Americans or women or the disabled, would the Post print it? Is there a difference?

“We select letters based on their newsworthiness, and the words of an elected official are important. Whether or not we agree on the writer’s point of view has no bearing on our decision to publish their letter,” Kristine Coratti Kelly, Vice President of Communications and Events, said in a statement to LGBTQ Nation. “We include links in letters that provide context on the subject being addressed.”

Newsweek cites a Serbian urologist and a former mental patient who doesn’t think “there’s anyone born transsexual” as the basis for their article. That doesn’t seem very authoritative or contextual. It sounds like fake news and bad journalism – something the Washington Post normally doesn’t tolerate or tacitly endorse. And that link was added by Post staff – not Marshall.

The paper didn’t respond to a follow up question asking if they would publish a similar slur about African-Americans or women or the disabled if it was written by a bitter elected official on his way out of office as part of a political payback stunt.

“I wonder when Gov.-elect Ralph Northam (D) will open up our highway rest stops and state office building locker rooms and bathrooms to people who think they are the opposite sex, just as they are trying to do in our public schools,” Marshall wrote in his letter.

Will the Post take responsibility for helping to stoke the anti-transgender bathroom hysteria that’s been circulating and allowing Marshall to reduce transgender people to their genitals? It’s doubtful, but it should still be pointed out.

People write all sorts of crazy stuff to newspapers that never sees the light of day. If the Post wanted to highlight Marshall’s raving, it should have been as a news story and not with a platform to spew transphobic comments and conspiracy theories.

The difference is “important.”

Cancel reply
Why is the Washington Post publishing a transphobic attack on Danica Roem?