We are on the threshold of a historic decision on individual rights by the Supreme Court of the United States as it considers two cases involving same-sex marriage. The cases about “who you love” could change the laws in 41 states and more than 1,000 federal statutes.

Regardless of what is said in the oral arguments, a reading of the merits briefs makes it clear that the Court will have to rule in favor of gay marriage, and will improve the lives of 130,000 legally-married couples in same-sex marriages.

The cases involve Proposition 8, an amendment to the California constitution, and DOMA, the Defense of Marriage Act, both of which define marriage as a union between a man and a woman.  Both laws have been struck down by federal appeals courts – and the Supreme Court will do the same, because:

Granted, the conservative members of the court – like Antonin Scalia and Clarence Thomas – will struggle to find a way to uphold the laws, and show deference to an act of congress and a vote by a state’s electorate. But they will have to rely on weak arguments like tradition (“it’s always been this way”), moral beliefs (personal bias), and crazy concepts like sexual orientation being a “fluid characteristic” (try changing your own sexual orientation).

There is a possibility that the Court may punt and dismiss the cases on procedural issues. But then why did it agree to rule on two very high-profile cases, allow for the filing of dozens of amicus briefs and set aside two days for oral argument? That would be a colossal waste of everyone’s time.

What to look for in the arguments

The central issue is whether the Court can see that sexual orientation – like gender, race and national origin – creates a discernible class of people based on their personal identity. The Constitution recognizes this as creating a “suspect class,” which violates the Equal Protection Clause that all persons who are similarly situated should be treated alike.

This should be easy. There has been a history of laws against gay people since colonial times in the U.S., in employment, immigration, hate crimes, child custody, police enforcement and voter initiatives. Gay people have battled for years to get nine states plus Washington, D.C., to legalize same-sex marriage.

Next, the Court must see that Prop 8 and DOMA penalize members of the class. This should also be easy.

The legal analysis favoring gay marriage should end there, but there’s more.

No help or harm to straight marriages

People get married for many reasons, including forming a household, social and economic support and companionship – reasons that have nothing to do with babies. Many people get married with no plans to have children.

Further, scientific studies show that children with gay parents grow up just as healthy, successful and well-adjusted as other children. In California, 40,000 children are currently being raised by same-sex couples.

In sum, the laws fail to support the institution of marriage.

How we got to this point

U.S. v. Windsor, No. 12-307. The Defense of Marriage act was passed by Congress and signed by President Clinton in 1996.  It was a response to a Hawaii Supreme Court decision that same-sex marriage licenses may have been required by that state’s constitution.

The law hit home with for Windsor and another woman, Thea Spyer, who were legally married in New York. Dr. Spyer died in 2009 and named Windsor as her sole heir. Windsor had to pay $363,000 in federal estate taxes because the IRS denied her the marital deduction, saying she was not a “spouse.” She filed suit, asserting that the law violated the Equal Protection Clause of the Fifth Amendment. The Second U.S. Circuit Court ruled in her favor, granting her a tax refund.

The Department of Justice refused to defend DOMA. So the leadership of the House Republican Party filed a brief defending DOMA on the basis of morality, tradition, responsible procreation and child-rearing, the sovereignty of states – and saving money.

However the Supreme Court has ruled in the past that moral objections and prejudice are not a legitimate policy objective, especially to justify a law that discriminates. Neither is tradition, which has been used to oppress racial and religious minorities.

Hollingsworth v. Perry, No. 12-144. Proposition 8 was enacted by voters of California in 2008, following a $40 million political campaign that urged voters to protect their children from gay marriage.

It created a stigma that gays and lesbians are different, less worthy and not equal under the law. Gays were left the option of forming a domestic partnership, which give same-sex couples marital rights under state law – but withholds the designation of “marriage.”

The City and County of San Francisco sued the public officials responsible for enforcing the state’s marriage laws, arguing that it violated the Equal Protection Clause, and said they would not defend Prop.  8.  The operators of ProtectMarriage.com intervened to defend the initiative, noting that 40 other states ban same-sex marriage. It argued that marriage has always been designed to regulate sexual relationship between men and women, and that Prop. 8 advances this purpose

The Ninth U.S. Circuit Court of Appeals struck the law down in 2012. Kristin Perry and her partner, Sandra Stier of Berkeley, argue that the Supreme Court has said many times that that the liberty to select the partner of one’s choice is a fundamental right. They argue that marriage is not the sole preserve of people who can phsycially have children.

Prop. 8 creates a permanent underclass of couples who are not good enough to marry. A law which discriminates must have a rational relationship to its goal, and prohibiting gay marriage does not make it more likely that straight couples will marry. Further, research shows that permitting same-sex marriage has no adverse effect on marriage, divorce, abortion rates, the percent of children born out of wedlock or the number of household headed by single mothers.

Prop. 8 excludes same-sex couples from one of life’s most precious relationships, and therefore is unconstitutional.

This week the news media will focus on the arguments before the Supreme Court and try to extract the views of the Justices based on their comments. But when everything is said and done, the written briefs are what counts.

It is obvious that Prop. 8 and DOMA do not advance the stated goal of channeling people having babies into marriage. It is clear that the laws single out a distinct and persecuted minority, and burdens it with a denial of benefits and second-class citizenship. Regardless of whether the Supreme Court gives the cases “heightened scrutiny” or a standard review, it will have to see the prejudice built into the laws and will strike them down.

© 2013. Larry Bodine is Editor-in-Chief of Lawyers.com.
Opinions and advice expressed in our Views & Voices columns represent the author’s or publication’s own views and not necessarily those of LGBTQ Nation. We welcome opposing views and diverse perspectives. To submit a article, column or video, contact us here. Due to the volume of submissions received, we cannot guarantee publication, however you are invited to express your opinion in the comment section below.
Categories: Commentary
Tagged: Defense of Marriage Act (DOMA), Marriage Equality, Proposition 8, U.S. Supreme Court 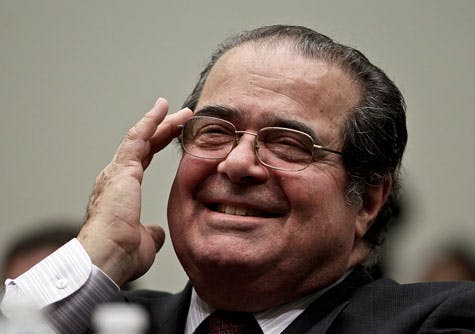 If you are familiar with key political figures in the gay rights culture war, then you have probably heard of U.S. Supreme Court Associate Justice…

Cancel reply
Why the U.S. Supreme Court will rule in favor of same-sex marriage