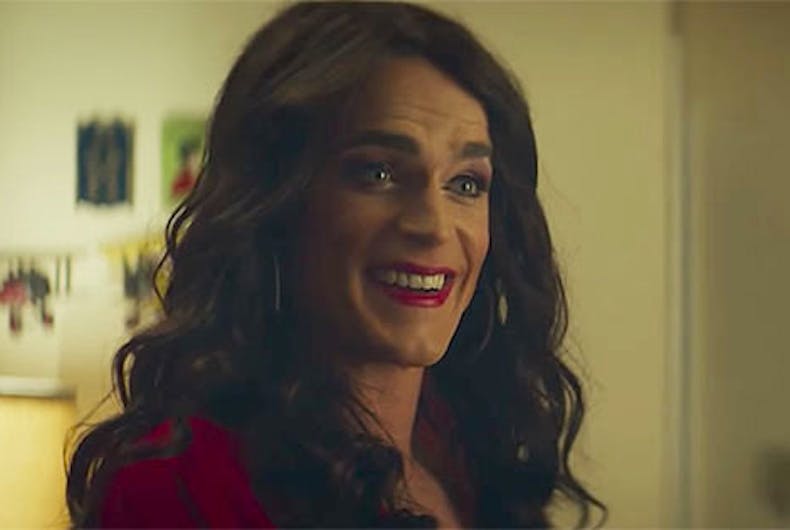 The film Anything is set to be released on May 11, but transgender activists are trying to get people to boycott the film.

At issue is Matt Bomer’s portrayal of Freda, a sex worker who befriends her widowed neighbor. Bomer is a cisgender man, Freda is a transgender woman.

On Facebook, the organization Trans Narratives posted a meme calling for people to avoid Anything and see A Fantastic Woman instead.

The meme has been shared almost 4000 times, and I agree with the point: it’s time to stop supporting films where cisgender people play the roles of transgender people.

So what’s the issue here? Don’t actors play the roles of people who are different from them all the time?

Well, part of the problem is that we actually don’t live in a culture where it’s common for men to play women in films and for women to play men. In fact, it’s practically unheard of.

For example, there’s no chance that, say, Timothée Chalamet would have been cast in the role of Sophie in the upcoming Mamma Mia sequel, even if he wanted to play her and the director thought he was the best actor for the role.

And audiences would never expect Matt Damon to play the role of Ben Affleck’s wife, even if he dressed as a woman and the film took his performance seriously.

I would like to see more cross-gender performances, but the fact that Hollywood only thinks that men can play transgender women but never cisgender women speaks volumes.

Another part of the problem is that there are so few roles for transgender actors because of discrimination. Jen Richards describes being told that she doesn’t look transgender enough to play a transgender person on film, even though she is in fact transgender.

“They said you don’t look trans enough,” my agent told me over the phone, “What the hell does that mean?”

I laughed. I was finally joining the club that included my friends Angelica Ross, Trace Lysette, Rain Valdez, Jamie Clayton, and Alexandra Grey.

“It means that they want the audience to know the character is trans just by looking at her,” I explained, “And in their mind that means a guy in a wig.”

Directors aren’t just looking for the best performance for a role – they are looking for someone who looks like what they imagine the role to be.

Moreover, it sends a message to audiences that there is a certain way to look trans that isn’t real. That’s a false stereotype, and it should be challenged.

Not only does this hurt transgender actors, it also doesn’t bode well for how transgender people are portrayed by Hollywood.

Last, it seems like a lot of transgender people just don’t like this practice. And that should count for a lot.

But we don’t hear waiters complaining that films don’t cast actual waiters to play waiters on screen. On the other hand, if a white actor played the role of a black person and used makeup to darken their skin, people would not be fine with that.

Sometimes you just have to listen to other people’s feelings. This is one of those times.

There really isn’t an equivalent problem for gay people. My favorite movie is Brokeback Mountain, and it doesn’t bother me at all that straight people played Jack and Ennis since they did a good job.

But if Anne Hathaway were cast in the role of Jack Twist because the producers thought audiences would rather see Heath Ledger kiss her instead of Jake Gyllenhall? That would have been a problem.

It’s impossible to make universal rules about whether an actor can play a certain role or not, because whether it’s good or bad depends on context.

And the only way Hollywood will get the message is if people speak out and stop seeing these films. Matt Bomer as “Freda” in “Anything.”Photo: Great Point Media via Deadline Hollywood We’re finally getting a look at Matt Bomer playing a transgender woman in…