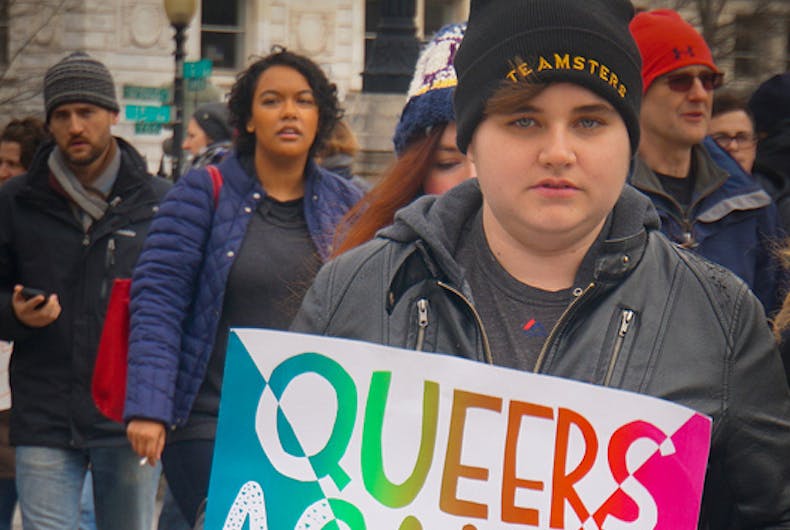 The Democrats have perfected the art of the circular firing squad. The latest example is the brouhaha over a resolution taking first-year Rep. Ilhan Omar to task for using tropes that could be interpreted as anti-Semitic. The resolution took a broad swipe at every form of bigotry: anti-Semitism, white supremacy and “every form of bigotry and hatred against people based on religion, race, or place of birth and origin.”

In short, every form of bigotry except anti-LGBTQ bigotry.

So how did the party that is supposed to represent the LGBTQ community’s interests somehow manage to omit even a passing reference to the everyday violence directed against us in a resolution that is meant to condemn bigotry?

In part, the mad scrambling around the resolution probably played a role. The debate over Oman’s comments took on a life of its own as the younger progressive members of the Democratic caucus in the House expressed their anger that Omar, the first Muslim woman to serve in Congress, was being unfairly singled out for legitimate criticism about Israeli policy. The rift exposed a growing generation gap within the Democratic party that threatens it as it enters the 2020 presidential season.

After much to-ing and fro-ing, the Democrats arrived at a resolution that spends the bulk of its verbiage condemning both anti-Semitic and anti-Muslim animus. Still, the resolution manages to bring in the internment of Japanese-Americans during World War II and attacks on JFK for being Catholic during his presidential campaign.

The absence of any mention of anti-LGBTQ prejudice is particularly striking given the resolution’s explicit condemnation of white supremacists. (You know, the “fine people” that President Trump talked about after their violent rally in Charlottesville in 2017.)

Given the genesis of the resolution, its focus on anti-Semitism and anti-Muslim rhetoric is entirely fitting. But it’s puzzling that anti-LGBTQ bias didn’t merit even a brief mention.

Moreover, the Democrats could’ve scored some political points in the process. A mention of anti-LGBTQ hatred could have been a poison pill for many Republicans, forcing them to decide whether they wanted to be on record condemning anti-Semitism at the expense of their core anti-LGBTQ principles.

Instead, the resolution passed overwhelmingly because Republicans were perfectly happy to use it as a cudgel against the Democrats, portraying them as the party of anti-Semitism. That the party of Steve King and actual neo-Nazi candidates (to say nothing of Trump himself) could somehow take the high road is an example of how Democrats bungled the whole thing. Rep. Liz Cheney is condemning the Democrats for “enabling” anti-Semitism, while remaining silent about the president’s endless record of thinly veiled racist comments.

Of course, that’s the whole point: Republicans are shameless, while Democrats are trying to act responsibly, which puts them at a distinct disadvantage. The party’s messy internal debate gets played out in public. But it doesn’t help when the party forgets one of the communities suffering the brunt of the bigotry it’s attacking.