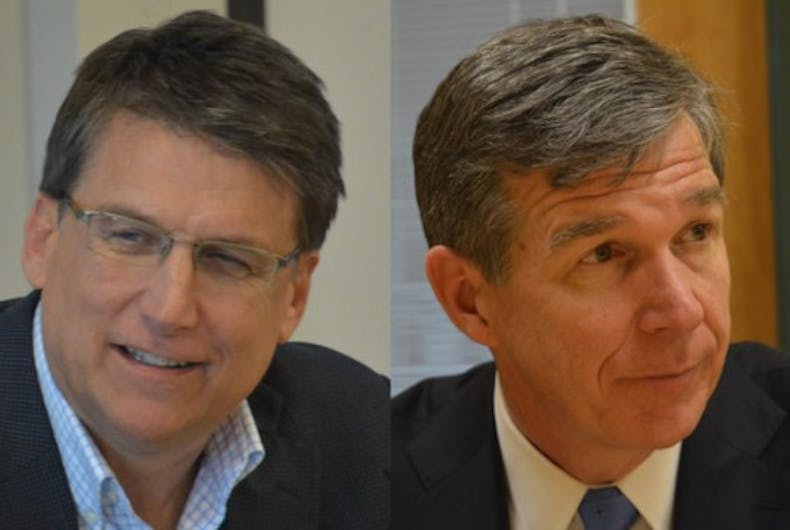 North Carolinians who didn’t get to be part of the spirited early voting process, hit the polls today.

There are many reasons why the sitting governor, Pat McCrory, doesn’t deserve another term. In fact, the Independent Weekly found 66 compelling reasons not to vote for the man, including absurd cronyism, failure to expand Medicaid over the Affordable Care Act, plus he has done all he can to destroy the state’s education system and screw the environment.

But his real claim to fame (or infamy) was his craven and bone-headed decision to encourage passage of and sign NC‘s House Bill 2, that rolled back local anti-discrimination ordinances and prevented municipalities and counties from passing any future protections — among other significant, onerous things. Democratic Attorney General Roy Cooper, who is on the ballot to unseat McCrory, said during a debate:

You can read more about other fun aspects of HB2 here.

Remember, North Carolina had no state law protecting the rights of LGBTQs in terms of employment or public accommodations to begin with, but the burning desire of McCrory was to “protect girls in bathrooms from male predators in dresses.” That was the impetus for the middle-of-the-night passage and signing of HB 2 into law.

If you are transgender, in order to use public restroom facilities in government buildings, you must match the gender on your birth certificate instead of your gender identity. Private businesses can choose whether to discriminate or not. Notably, this is unenforceable and McCrory knows it; it also scoops up gender-nonconforming folks in this hot mess that only encourages vigilante potty protection for a problem that didn’t exist.

And all I can do is shake my damn head when Gov McCrory says Caitlyn Jenner should use men’s facilities.

Potty Peeper Pat truly deserves to go down in flames. He has made the state a laughingstock and a pariah — driving away $650 million in business and investment pushing this disgusting law. Laughably, he tried to clean up the messaging by releasing this laughable campaign ad in September, “Common Sense“:

“You know, when we were raising average teacher pay, creating new jobs and cutting taxes, other folks were actually pushing to make our schools allow boys to use the girls’ locker rooms and showers. Are we really talking about this? Does the desire to be politically correct outweigh our children’s privacy and safety? Not on my watch. Our kids and teachers are my priority. This is North Carolina. Let’s do what’s right.”

But what is the chance of repeal? Even if a few seats in the General Assembly turn over during the election, because of GOP control and gerrymandering, there won’t be a sweeping turnover to assist Cooper in repealing HB2. The pressure will have to come from loss of business. Keep that pressure on.

But what is heartening is that many, many mom and pop businesses here know what is good for business — supporting your trans customers (and their allies) shows you are “open for business.”

“Emily Waggoner, whose partner is transgender, told BuzzFeed she was “devastated and depressed” by the law’s passage, but inspired by the community outcry. She scoured social media for businesses posting transgender-friendly messages, and reached out via email, Facebook and Twitter to those that didn’t. She took her findings and compiled them into an interactive map, which trans visitors can use to find a place to pee in peace.”

Social change from the good people in the state will have to lead by example as well as brave trans North Carolinian like Selena Milian of Overhills High School in Spring Lake, NC. She was voted the first transgender homecoming queen here, living openly and supported by her peers.

And as the Supreme Court moves to take up transgender teen Gavin Grimm’s case to use the boys bathroom at his Virginia school, there is hope that North Carolina will see a ruling that will wash away the legislative garbage of the “bathroom” demonization of transfolk.

Within the margin of error, peeps – so if you haven’t voted, my neighbors, get your caboose out there and cast your ballot!

Cancel reply
Will a Democrat victory in NC mean the state’s anti-LGBT law will go away?