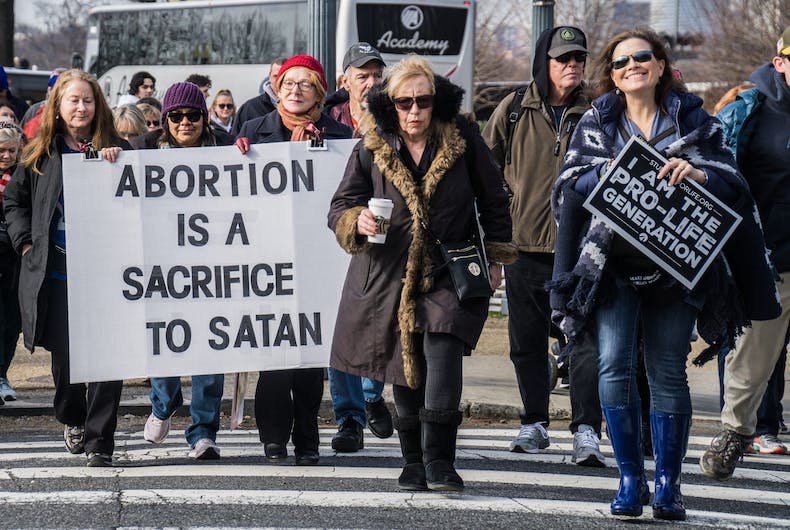 January 24, 2020 Anti abortion activists march in the March for Life on the 47th year anniversary of Roe vs Wade.Photo: Shutterstock

Right-wing evangelicals and conservative Catholics like to say they are pro-life. They even had a big March for Life earlier this month on the National Mall, where President Donald Trump thanked participants for “making America the pro-family, pro-life nation.”

But Trump and his supporters are phony hypocrites because they are outspokenly anti-gay. The fact is, you cannot claim to be pro-life unless you are also pro-LGBTQ.

Related: Trans teen suicide attempts may have spiked because of Trump’s tweets

Let me repeat that: you cannot, under any circumstances, claim to be pro-life if you are also anti-LGBTQ

Suicide is the second-leading cause of death for all U.S. teens. But LGBTQ teens are five times more likely to make an attempt on their life than their straight peers.

Furthermore, Dr. Caitlin Ryan published a study in the Journal of the American Academy of Pediatrics that showed: “LGBT teens who were highly rejected by their families were eight times more likely to have attempted suicide, six times as vulnerable to severe depression, and three times more likely to use drugs.”

So it’s clear that negative actions and attitudes against LGBTQ teenagers can have serious, life-altering consequences.

Upworthy reports that legalizing gay marriage has caused a dramatic drop in LGBTQ suicide rates. While the studies supporting this don’t show direct causation, they do suggest a strong correlation.

One study by Julia Raifman, a researcher at Johns Hopkins’ Bloomberg School of Public Health, showed that in the 32 states that enacted same-sex marriage laws during the study (prior to nationwide marriage equality), suicide attempts dropped seven percent among all students and 14 percent among gay kids after the laws were passed. There was no change in suicide attempts in states without those laws.

A 2019 study in Denmark and Sweden found similar results among married gay couples. Gay marriage was made legal in 2009 in Sweden and 2012 in Denmark. The study found that couples in same-sex unions saw a 46% decline in suicide, compared to 28% of those in heterosexual unions.

The researchers said: “Although suicide rates in the general populations of Denmark and Sweden have been decreasing in recent decades, the rate for those living in same-sex marriage declined at a steeper pace, which has not been noted previously.”

One would think that fundamentalist Christians would look at these statistics and say, “We need to change our ways. What we are doing is harmful, destructive and not pro-life.”

Instead, they are doing the opposite.

Sadly, these Christians just don’t seem to care about life if the person is LGBTQ. If they are gay or trans, they are expendable, collateral damage in the Culture Wars.

LGBTQ Nation reported that Republican lawmakers in Iowa filed a bill that would remove transgender people from the state’s civil rights protections. This monstrous bill could make Iowa the first state to rescind protections for transgender residents.

Meanwhile, Republican South Dakota Rep. Fred Deutsch just compared parents and doctors who help transgender youth to Nazis. Deutsch also filed a disgusting bill that would ban a list of gender surgeries from being performed on someone under the age of 16, and the bill passed the state house.

Republicans in at least ten states are working to ban any gender confirmation-related medical care for transgender youth.

They are doing this despite a recent study that found puberty blockers were effective in stopping suicidal thoughts in two-thirds of people who wanted them as teenagers and got them. And these troglodytes pretend to be pro-life. Who the hell are these hate-mongering bigots kidding?

These religious zealots might be in favor of protecting the unborn. But having a fetus fetish is not the same as respecting all human life.

So if you only care about the unborn and don’t care about living, breathing people – just because you don’t like them – please rename your movement pro-fetus, but you ain’t pro-life.