This one takes the cake, as well as the main course and appetizer: Newt Gingrich, the former House speaker who was on Donald Trump’s short list of potential running mates, entertained a room full of gay Republicans by dishing about a beauty pageant winner’s weight.

And if that were not catty enough, the failed former presidential candidate has plenty of his own personal experience with weight loss and gain. But that didn’t stop him from defending Trump’s offensive comments in Monday’s presidential debate with Hillary Clinton, about the former Miss Universe, Alicia Machado.

Clinton said he had called her “Miss Piggy” and “Miss Housekeeping,” referring to her Latina heritage.

Gingrich focused his defense on Trump’s remark about Machado’s weight, then admitted his words amounted to “sexist” scuttlebutt:

“You’re not supposed to gain 60 pounds during the year that you’re Miss Universe,” Gingrich told the Log Cabin Republicans at their dinner Wednesday night in Washington, according to Politico. “Not fair. Even my act of saying that is sexist and proves I’m not being sensitive.”

As New York magazine pointed out, “Well, he definitely got one thing right.”

Machado told Cosmopolitan she had never gained as much weight as Trump said she had, and that his verbal abuse triggered a bulimia hat took  years to overcome. She also confirmed what Clinton said in the debate: that she became a U.S. citizen specifically to vote against Trump.

Gingrich famously dropped a ton of weight in the 2011 run-up to the 2012 election, as reported by The Atlantic’s website, The Wire. And in 2012, the Washington Post’s Jerry Markon reported that when he dug through the Gingrich archives at the University of West Georgia, he learned how much the former speaker detests suggestions that he is fat:

“His staff noted that he could be sensitive about his weight. When a staff member referred to Gingrich as ‘the big man’ in a 1984 memo, he scrawled at the top: ‘The big man? I am on Scarsdale,’ an apparent reference to the then-popular Scarsdale diet.”

And the Los Angeles Times quoted an “associate” as saying this about Gingrich:

“He’s one of the most insecure people I’ve ever met… It’s really kind of touching, but I always got the sense that he constantly needs positive reinforcement. I have a theory: Newt is the fat kid who always got beaten up and now finds himself with power.”

And Salon opined that “Gingrich’s girth has so thoroughly defined his image in the American psyche that he was famously lampooned by none other than “Saturday Night Live’s” Chris Farley.”

Sadly, Farley is gone, and so apparently is Gingrich’s dedication to respecting his weight, or the struggle of others. 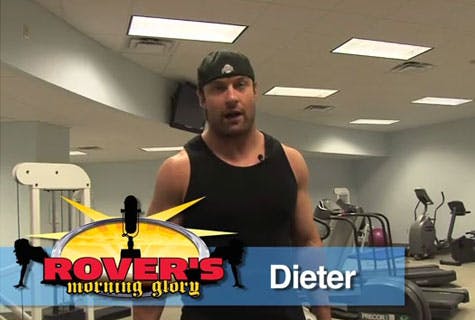